To IMB or Not IMB – Is Not a Valid Question To IMB or NOT IMB – Is not a valid question, here we go into an experience where we wanted to list a villa of a property owner

A couple of weeks ago, I drove out to my first ever meeting with a prospective vendor. I’ll admit I was a bit nervous and maybe I didn’t make an ideal first impression, but the real problem wasn’t how I arrived I’m oddly relieved to say, the problem was with the vendor and his mindset.

The first red flag popped up just after we’d walked the property. He seemed to be genuinely interested in having me sell the house, so I presented a copy of our standard listing agreement. Now I don’t have a lot of experience with vendors, this was my first time remember, but I would have thought that if a prospective seller says something along the lines of “it’s my principle never to sign anything legally binding with an agency,” any agent worth their salt would be curious, even suspicious, as to why that is. Sure, he was interested in having me sell his house, just not as a Bali Luxury Estate agent? Spider senses began to tingle.

We stepped out of the property. Before I could get to the nuts and bolts of why he wouldn’t sign an agreement, I noticed there wasn’t an IMB plate tacked onto the front of the property. The IMB, by the way, is proof of a building permit and all features that have them, display them. I figured this was the reason he was so reluctant, and I was half expecting an excuse.

But I asked anyway because that’s what I do.

“So have you got the IMB for this house?” I asked.

He wasn’t even trying to deny it! There wasn’t an ounce of hesitation when he openly admitted his property was illegal.

Well, this is Bali and every so often you’ll come across these types: people who are clearly violating Indonesia’s laws and regulations, but aren’t very much afraid of admitting it because they know – and you should also know – that just about half of every law passed in this country is an ethical grey area. One needs to look no further than the way people drive on the island to understand that!

He went on to explain, “it’s pretty much impossible for me to get an IMB out here …”

Here it comes, I thought – the justification.

“… because this land, that I bought and built on, lies on a green belt.”

He wasn’t even trying to give a bureaucratic excuse. He was just telling me more about how illegal his place was.

So, not only did he build a house that he’s now trying to sell, perhaps to some unsuspecting folks who would have to deal with any future consequences to his actions, he also purchased and developed a piece of land that’s supposed to be conserved as a farmer’s beautiful plot of rice paddies! And he knew it!

For some people, there are attractions and advantages of developing properties illegally here in Bali. I guess it makes sense if you’re that way inclined. The process of getting an IMB approved by the government can be very tedious, consuming not only a lot of time and energy but also money. And the payment is an important consideration, especially considering our government has a bad rep amongst its people as well as expats and tourists.

There still seems to be a correlation between the amount of money you give to an official and the likelihood of having a permit approved (or not) promptly. My colleagues tell me a few years ago the vendor of this particular story could have taken a brown envelope stuffed with cash to a government official (or four depending on the size of the container), and he would have got the IMB, illegal or otherwise, in a green belt or not, quite quickly.

Thankfully, over the last few years the government, both local and national, has cleaned up its act (or at least tried to) and it’s no longer the wild west. There are proper procedures in place, including zoning, and there are people like me who see the advantages and benefits of rules and regulations and want to see things change for the better.

I’ll show myself out.

As you can understand from this article To IMB or NOT IMB – Is not a valid question – it is a MUST! 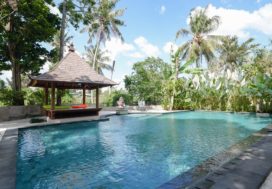 Investing Beyond Bali?
3 Insights Every Buyer Should Know